On March 4, the two sessions of China opened. 2021 is the 100th anniversary of the founding of the Communist Party of China, and it is also the first year for the implementation of the "14th Five-Year Plan" and the start of a new journey of building a modern socialist country in an all-round way. China's economic development is closely related to the world. Media from many countries in the Middle East paid close attention to China's 2021 economic growth goals, green development, technological innovation, and poverty alleviation.

The article said that on the 5th, the government work report of the two sessions announced that China's economic growth target in 2021 is more than 6%, and emphasized the need to promote reform, innovation and high-quality development. The article also pointed out that in the context of the global impact of the epidemic, China's anti-epidemic measures have been effective, and the Chinese economy is expected to continue to recover. 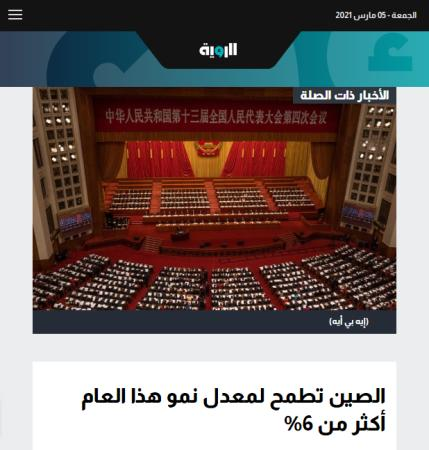 In addition, the well-known Arabic-language newspaper "Viewpoint" in the UAE also published an article on the same day entitled "China hopes that this year's economic growth rate will exceed 6%", reporting on the two sessions this year. 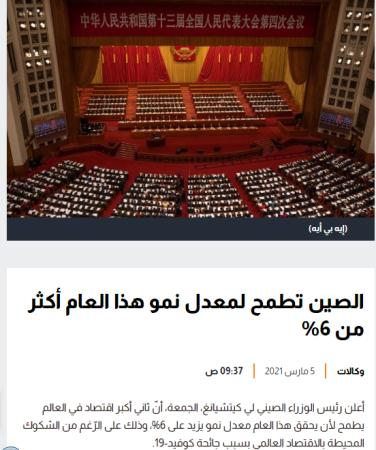 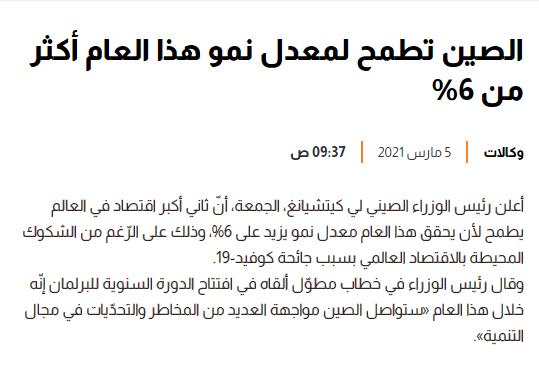 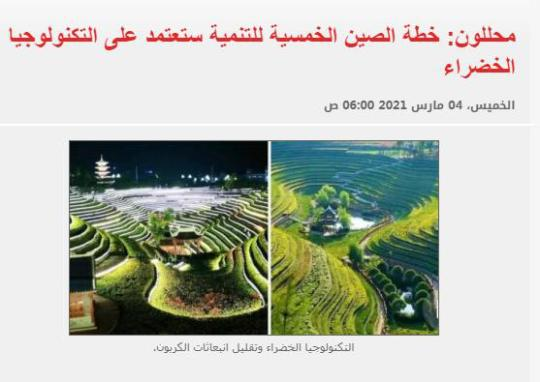 On March 4th local time, the Egyptian media focused on China's development plan for the next five years. The official website of the local media "Seven Daily" published the title "China's Five-Year Development Plan Will Be based on Green Technology". In the article, analysts said that China's economic and social development plan for 2021-2025 aims to rely on green technology and reduce carbon emissions. Give positive comments.

The commentary pointed out that China’s economic and social development plan will provide a strong signal to Chinese industry that it will get rid of the use of fossil fuels, which means that China’s future greenhouse gas emissions will fall within five years. 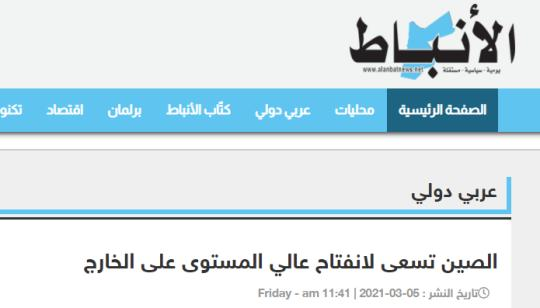 The local Jordanian media "Nabat" published an article "China is seeking a higher degree of opening up" on March 5.

According to the article, according to the government work report submitted to the National People's Congress on Friday, China is implementing a policy characterized by opening to the outside world, which is characterized by a wider scope and better participation in international economic cooperation. According to the report, the country will promote the stable development of imports and exports, take measures to promote new business models including cross-border e-commerce, reduce the areas forbidden to enter foreign capital, carry out more comprehensive pilot programs, open up the service industry, and provide cross-border e-commerce. Develop a negative list for trade in services. The report pointed out that China is committed to protecting the legitimate rights and interests of foreign-invested enterprises and welcomes foreign investors to expand their investment in China and participate in its vast open market and development opportunities.

Iran’s Tasnim News Agency also paid attention to the opening of the two sessions, and paid special attention to issues such as poverty alleviation and rural revitalization. 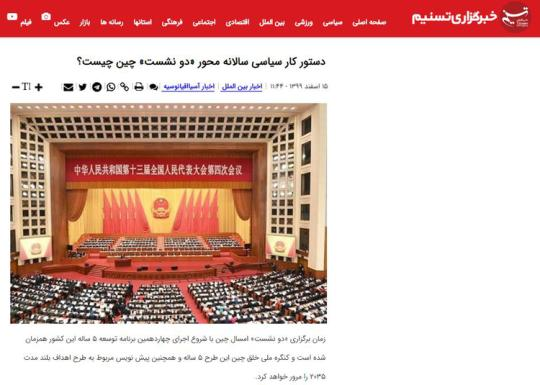 The report cited the "Iran Economic News" recently published a review article written by the former Iranian representative to the World Food and Agriculture Organization Hussein Imadi on China’s poverty alleviation. The article stated that China has lifted 770 million people out of poverty. The world has played its biggest role in poverty reduction.

In addition, local Iranian media have paid attention to the development of China's scientific and technological innovation capabilities in recent years. On March 5, Iran's official news agency published a commentary article "The Chinese Mars Rover will land on Mars in three months", paying attention to China's Mars exploration program. The article is also equipped with the first coloring rendering of Mars image taken by "Tianwen No. 1". 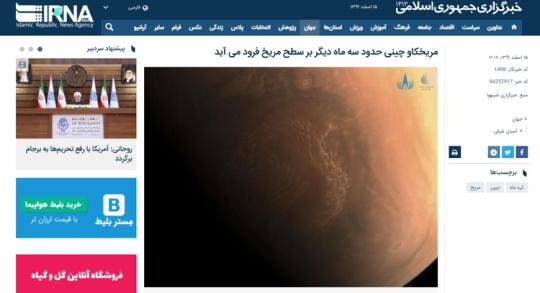 Yitong News Agency quoted Bao Weimin, a member of the National Committee of the Chinese People’s Political Consultative Conference and director of the Science and Technology Committee of China Aerospace Science and Technology Corporation, as saying that “Tianwen No.1” is conducting orbiting exploration on Mars at a speed of 4.8 kilometers per second, and it is expected to be by June this year. Landing on Mars.